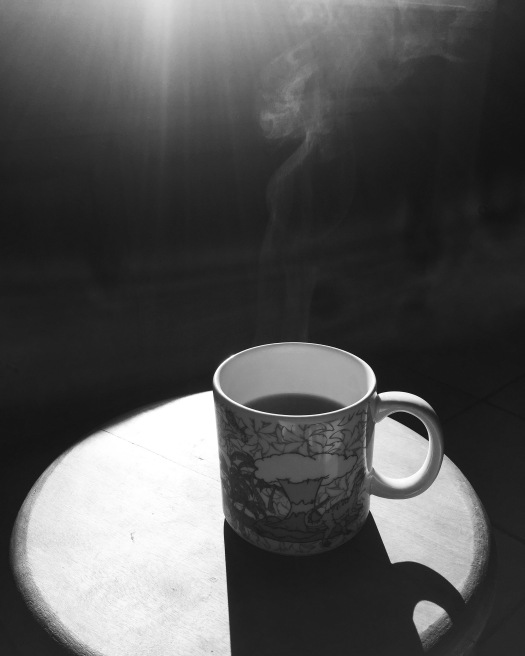 May was a mad rush of manuscript revisions, other work, and life being, well, life. The laundry doesn’t do itself just because you’re busy rewriting Chapter 11, though what a neat trick that would be… But in the middle of all that busy, I still managed time to read. Here are a few of my favorites from the past few weeks.

I FINALLY READ CROOKED KINGDOM! I’ve been promising myself for a while now that I’d read the sequel to Leigh Bardugo’s Six of Crows, and I actually got around to it this time. Worth the wait!

As Kaz and company strive to right the wrongs committed against them they get sucked down into a deepening spiral of subterfuge, trickery, and intrigue. Beautifully written, the story is well-paced and has enough twists and turns to keep readers on their toes the entire time. And the romances are lovely!

I’ve been wanting to read Holly Black’s work for a while now, and I started out easy with the Magisterium series she’s co-writing with Cassandra Clare. Although I found the books in my library’s teen room, they’re really middle grade, and I think I read the first four in under a week.

The Iron Trial, The Copper Gauntlet, The Bronze Key, and The Silver Mask bring a neat little twist to the ‘teen discovers they have magic and goes to magic school’ formula. I’m not going to say much because #spoilers, but I certainly wasn’t expecting the direction the tale took from the end of Book 1, and this was a refreshing departure from the theme. This is a great series, and I’m looking forward to the conclusion in The Golden Tower, out September 2018.

There’s nothing better than a new InCryptid book, so when I realized that the most recent title in Seanan McGuire’s series, Tricks for Free, was out, I rushed to buy it. We get more of Antimony’s point of view in this one, and plenty more Sam, which made me a very happy person as Sam is adorable.

I absolutely love this series. It’s fun, fast-paced, and light-hearted while tackling some pretty big issues, and McGuire’s world is full of amazing cryptids and characters that keep you invested from page one. If you like urban fantasy and haven’t yet discovered these books, give the first one a try. You won’t regret it, I promise you!

Kelly Robson’s The Human Stain recently won the Nebula award for best novelette, and as I’ve been meaning to read this for a while, this was the perfect moment. The story takes us to a remote castle in Germany, following a British expat who is hired to care for her friend’s nephew.

This gothic horror tale is perfect for a shivery afternoon read (or a nighttime one, if you dare!). Robson’s elegant prose contrasts nicely with the growing darkness of the story, which has an ending that will definitely leave you off-kilter for a good while.

I just started an ARC for Afterimage by Naomi Hughes, out in September 2018. I’m not very far in, but I love the concept and am excited to read on. The story begins with an explosion that leaves the only survivor racing to find out who is behind it all. And the only person she can turn to is a transparent boy who she’s not sure is a ghost or a hallucination.

Thanks to the Penguin Children’s Fall preview I attended last month, I have a lovely big pile of middle grade and YA ARCs to read. I’m thinking of starting with Seafire, by Natalie C. Parker, the story of an all-female pirate crew. The book has been described as Wonder Woman meets Mad Max: Fury Road, so yes, please!

Another one from the ARC pile that I’m looking forward to getting into The Sacrifice Box, a horror novel by Martin Stewart set in the 1980s, and that sounds like a cross between Stephen King and Stranger Things.

On my to-read list is Myke Cole’s The Armored Saint, which came out in February but I haven’t had a chance to read yet. This is Cole’s first fantasy series, a little bit of a departure from his Shadow Ops world. I love Myke’s writing style, so this is definitely one I can’t miss out on.

I have a LOT of other things on my to-read list, but luckily summer is just ahead. The downside to school vacation is that I’m not sure how much writing I’ll get done. The upside, of course, is books, books, books. What’s on your summer reading list? 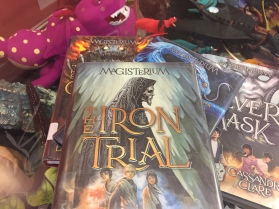 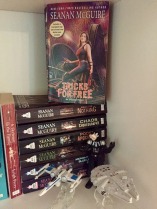 Summer is crawling to an end, and the cooler weather brings the promise of blanket-smothered tea-fuelled book binges. Of course, I did get some reading done while the kids were on school vacation. How about you, read anything good over summer? Let me know in the comments! 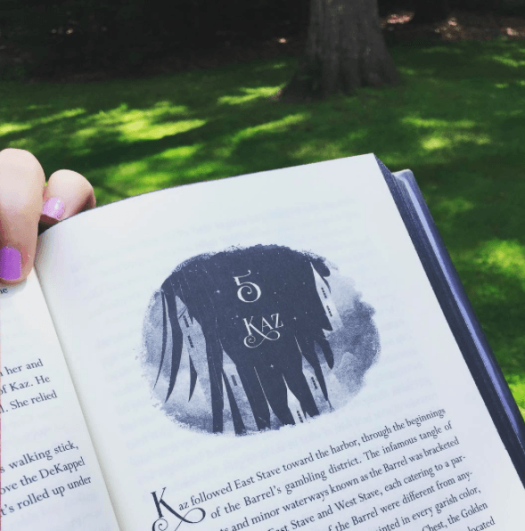 V.E. Schwab’s A Conjuring of Light, last in her Shades of Magic trilogy, has been sitting on my bookshelf for a while, and I finally got around to picking it up. I love Schwab’s crisp yet pretty prose, and the cast of characters in this series is fabulous.

This last book finds Lila, Kell, Rhy, and Alucard facing the possible end of Red London, and indeed their entire world. From the battle on the streets of the city, to a frantic adventure at sea, there was so much I loved about this novel, and it was a perfect end to the series that first brought Schwab’s work to my attention.

Another novel by a favorite author that had been waiting patiently on my bookshelf was Shadowcaster, second in Cinda Williams Chima’s new Shattered Realms series. Her first books in this world – the Seven Realms series – are among my absolute favorite fantasy stories. This new series is set a generation later, and although it takes the tale in new directions, it certainly doesn’t disappoint.

Leigh Bardugo’s Six of Crows has been on my to-read list for a while, and when my daughter picked it as her summer reading for school, I jumped at the chance to get my hands on it. I had read Shadow and Bone, the first in her Grisha trilogy, a while back, and really enjoyed it (I’m not sure why I never finished the series; perhaps it’s time to revisit it). Likewise, Six of Crows is a great novel and deserves every bit of the great press it’s had.

Six of Crows is set in the same world as the Grisha books, just in a different part of it. It has all the sorts of elements I love: a skilled band of thieves, a tricky heist, magic, mayhem, and great characters. It’s YA, but will definitely appeal to adult readers, especially fans of Scott Lynch’s Gentleman Bastards series. I already have the sequel (and last book in the duology), Crooked Kingdom, lined up and ready to go.

I’m currently around a third through Ready Player One by Ernest Cline. The book had been on my radar for a while, and when I saw the movie trailer the other day I thought I’d pick it up from my local library. It’s a little slow at times, because there’s a LOT of worldbuilding information thrown at the reader’s head, but the premise and story is so interesting that I’m finding I really don’t mind. Things are just beginning to heat up, and I’m looking forward to see where it’s all heading.

To Read: Phoenix, and Tiger, and Fairies, oh my!

I picked up a three-part serial by fantasy author Thaddeus White called Wandering Phoenix and Roaming Tiger – Episode 1, called Phoenix Rising, is up on Amazon for free as a taster, if you’re interested. The series is pitched as ‘Ancient China meets Robin Hood’, and since I’m already familiar with White’s work and his skills in writing adventure tales, I just know I’m going to enjoy this one!

I also have Jo Zebedee’s new fantasy novel Waters and the Wild on my list, a deliciously dark story set in the Glens of Antrim, in Northern Ireland. I read a very early draft of this one, and I can’t wait to see what the polished, finished story looks like. 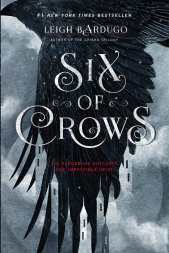 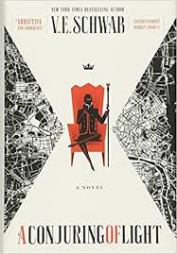 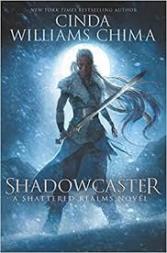