The Merriam-Webster dictionary defines a blurb as, “a short publicity notice, as on a book jacket.” Wikipedia tells us that the term ‘blurb’ dates from the very early 1900s, and refers to “a short promotional piece accompanying a creative work.” Wikipedia goes on to say that a blurb can be written by the author or publisher, or it may quote praise received from others.

Now, I have to say, when I first had the idea for this blog post, I was a bit confused about the whole blurb thing. Writers get invited to ‘blurb’ other writers’ books. (I myself wrote one for Suzanne Jackson’s The Beguiler.) But you also see writers talking about how hard they’ve been working on their book blurbs, meaning the short summary that often goes on the back cover. So which one, exactly is this mysterious blurb?

After a bit of enthusiastic Googling, I realized the answer is, of course, both. So what can make up a back cover blurb? All or a fraction of the following:

In the name of research, I went on a (well-behaved, church-mouse-silent) rampage around my local Barnes & Noble, looking at some of the new releases for examples of back cover blurbs. I actually found quite a variety, although the most common choice seems to be a combination of synopsis and endorsements.

Let’s start with middle grade fiction. Here’s bestseller Rick Riordan’s latest novel, The Hidden Oracle, which basically has nothing on the back but a few select bits of praise. Riordan is such a huge name in kid lit that he really needs no introduction or pitch, and his work sells on name alone by now. Compare it to my own battered copy of The Lightning Thief, his first ever children’s book. It’s the paperback, so it had already been out long enough to garner some decent praise, but it uses the standard set up of synopsis plus endorsements.

Moving into YA fantasy. First off, here’s Cinda Williams Chima’s first Seven Realms book, The Demon King. As you can see, it has a pretty extensive synopsis on the back, with only a couple of endorsements. Her most recent book in the same universe, Shadowcaster, goes for more of a teaser than an actual summary, and dedicates a much larger portion of the space to endorsements.

The latest book by heavyweight Sarah J. Maas, Court of Wings and Ruin, is actually pretty different from most of the others I looked at. It has an extensive synopsis on the back, and that’s it. She’s a big name in YA fantasy, though, and the line ‘#1 New York Times Best Seller’ on the front cover is probably the only endorsement she needs. 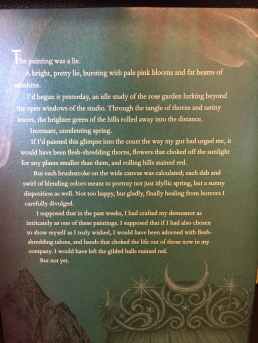 Another big hitter’s recent release, Lord of Shadows by Cassandra Clare, also makes an interesting choice. Here, the publishers have opted for nothing except a list of other works by the author. Possibly to find new readers for past works? 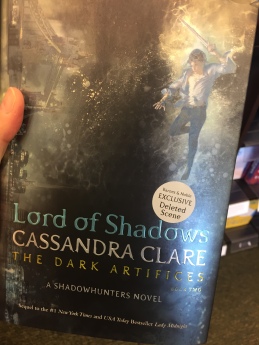 Moving into adult fiction, well-loved and established author Robin Hobb has nothing but an elegant collection of endorsements on the back of her newest novel, Assassin’s Fate. But then, when you start off your back cover blurb with a quote from George R.R. Martin, you don’t really need much more! 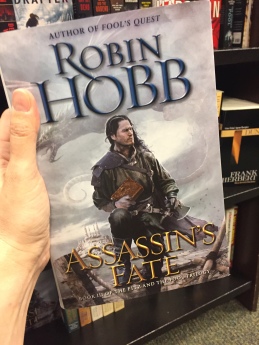 It was interesting comparing the first and second book in John Gwynne’s series, Malice and Valor (unfortunately, the bookstore didn’t have the subsequent titles for comparison). While most of Malice is taken up by a synopsis, the sequel devotes its real estate to praise for the first book, as well as a photo of its cover. Writer and editor Christy Yaros points out that part of the reason for this approach is to make sure that new readers understand this is a second book in a series, which is a really good point. 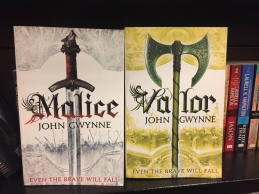 Another ‘before and after’ comparison: Mark Lawrence’s Red Sister, first in a new trilogy, devotes its back copy to praise for the author’s first two series. This plays a double role; it shows endorsement of Lawrence’s work, and also points new readers to his previous two trilogies. A clever example of making your back cover blurb work at multiple levels. Now, if you take a look at the paperback of Lawrence’s first published novel, Prince of Thorns, you’ll notice it dedicates a fair bit of cover space to a synopsis of the story. Back then, Lawrence was still a new name in the game. Now, he has a devoted following.

The next one I’m including for creative use of space. Julia Knight’s Swords and Scoundrels manages to include back cover copy, a cool little hook paragraph that makes it clear it’s the first in a trilogy, an endorsement, character art, and the covers for the three books in the series. And yet, even with all of this, it isn’t cluttered – in fact, it looks rather sleek, and as appealing as the front cover.

It was interesting seeing the difference between the back cover of a multi-published author’s first book, when they were still a new name, and their most recent one. That made me wonder, what do the truly huge names do? I dragged myself away from the SF/F shelves of the bookstore, and went in search of the latest bestsellers by some of the publishing industry’s giants. So, what’s on the back of work by Danielle Steel, James Patterson, and Clive Cussler? 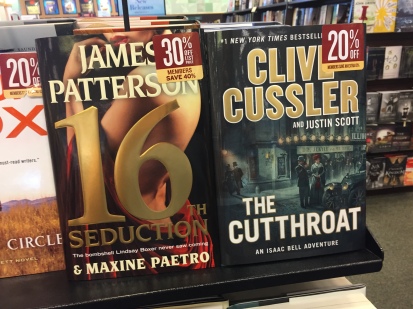