I’m so excited to finally share the cover for NIGHT BLADE, book 2 in the Blade Hunt Chronicles! This lovely bit of prettiness was designed by the talented Tom Edwards. Check out the cover below, as well as the book blurb and a sneak peek from chapter 1…

I have more goodies up my sleeve to share with you soon: adorable character art by Corinna Marie for a few character intros I’ll be doing on the blog in the upcoming weeks. You can find the ones Corinna made for HEART BLADE here.

NIGHT BLADE will be soon be up on Goodreads and Amazon – keep an eye on my social media for updates.

The vampire smiled at Raze. “How do you feel about a little undercover work?”

“The dangerous kind. The sort of work that should suit Raze perfectly, since you’re so determined to leave Rose behind,” he said. “A challenge. You’re infiltrating a heist. I think you’ll make an excellent cat burglar.”

In the aftermath of the Heart Blade’s return, Del and Rose have different roads to follow. One leads forward, the other to the distant past. Rose is on a mission to infiltrate and double-cross the ultimate heist, and retrieve a game-changing prize. Meanwhile, as the Court of the Covenant prepares to meet, Del has a quest of her own. She must untangle her lost identity or risk her entire future.

With the Blade Hunt prophecy in motion, darkness threatens to rise, and a new sword emerges from the shadows.

The motorbike raced along the deserted road, the engine a defiant roar in the dark. Bleak empty fields whipped past, the bright sparkle of Christmas lights left behind along with the last of suburban Toronto.

Raze tucked her cold face closer to the leather-clad back that rubbed against her cheek, tightening her arms around the lean waist as she screwed her eyes shut. The wind and the wild sang in her veins, tempting her, whispering. Let go, they said, join us. She smiled to herself — a grin that was all teeth and fierce pleasure — and ran her tongue over her chapped bottom lip.

She tapped his shoulder as they drew near, and the bike slowed and pulled to a stop underneath a towering elm tree, bare branches stark against the cloudy night sky. Raze climbed down, boots crunching on fresh snow. The driver killed the engine and pulled off his helmet, watching her as she tugged off her black woolen hat and ran her fingers through tangled curls. His name was Dave, or Steve, or something. She hadn’t really paid attention.

He was cute, dark-eyed and dangerous-looking. She moved closer, right in his face. He had a small scar on his chin. She ran a gloved thumb over it, and then leaned in and kissed him, hard and fast. Then she drew back, already turning away as she jammed her hat back on her head.

“Raze, you going to give me your number?”

She gave him a wicked smile over her shoulder. “Oh, I don’t think so.” Then she was gone, running through the ankle-deep snow to leap at the high wall, fingers and toes finding purchase where most people would see nothing but sheer stone. She climbed higher and higher, until she threw a leg over the top and sat there, watching the boy on the bike speed away.

Raze moved her other leg over and dropped. For one instant she drank in the thrill of falling. Then she shifted, clothes and skin and shoes and self turning to fur and packed muscle. She landed lightly and scented the night, the wolf’s senses coloring in everything that her human portion was blind to. And then she smelled him and froze.

“Raze? Is that what you’re calling yourself these days?” The vampire stepped out of the trees, his aura a faint red glow in the dark. She knew her own blue werewolf aura would be clinging to her fur like a cloud. She shook herself and shifted back, body prickling with cold from the sudden change in skin temperature.

“Alex,” she replied, aiming for casual. “I was just out for a run.”

Most of the first book in the Blade Hunt Chronicles is set in Connecticut, which – oh, hey! – just happens to be where I live. I moved here from Brazil almost four years ago, and was surprised at how heavily wooded the state is. I live in the Farmington River Valley, which although technically ‘suburbia’, gets plenty of wild visitors, like the black bears that like to make seasonal appearances in the area, besides coyotes, bobcats, foxes, beavers, and many others.

The Farmington Valley is where a good deal of Heart Blade takes place. I don’t specifically name the area in the book, but it was definitely the inspiration. In the stretch between New Hartford and Granby, the Farmington River meanders about in a wide U shape, adding grace to the small towns that nestle in and around its bend. If you want to get up close and personal with the river, Farmington River Tubing operates out of Satan’s Kingdom. And yes, that’s the real name of an actual State Recreation Area.

Heart Blade starts in Connecticut’s state capital, Hartford. Chapter 1 finds my character Del arriving at Union Station. She sets off along Asylum Avenue, which leads past the Connecticut Historical Society Museum and Library and on toward beautiful Elizabeth Park. The park straddles Hartford and West Hartford, and in summer runs a popular series of outdoor concerts.

Spring pretties in the park 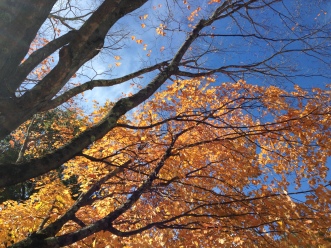 Another scene in Hartford finds Del and Ash outside the Connecticut Science Center. This is a great place to visit, especially if you have younger kids in your group, as the museum has a huge range of interactive displays on a wide variety of subjects. The CSS is right next to the Connecticut Convention Center, where ConnectiCon takes place every July. Lots of con attendees end up over at the CSS for lunch, so if you time your visit right, you might end up sharing a table with a bunch of cool cosplayers.

Just over the state line into Massachusetts, Old Sturbridge Village shows up in chapter 2, when I introduce Ash and the sentinels. This living history museum provides a nice opportunity to step back in time and see how life used to be in the 1830s. If you want to experience Sturbridge at night, as Ash does, they have a fantastic event that takes place on weekends in December. It’s called Christmas by Candlelight, and recreates traditional Yuletide activities such as carol singing and ornament making. There’s a big bonfire on the green, and visitors can buy mulled wine and other seasonal treats. 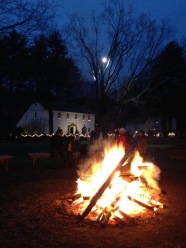 Go Huskies! Ash’s dad expects him to remain nearby after high school, and go to the University of Connecticut or another local college. Established in 1881, UConn’s main campus in Storrs is home to some 30,000 students from the USA and around the world. UConn has the top women’s college basketball team in the country; they recently suffered their first loss after a record-setting winning streak of 111 games stretching back to 2014, including two national championship runs.

Famous for it’s pizza, New Haven, on the Long Island Sound, also makes a brief appearance in Heart Blade. Here, you can tour Yale University, and make a stop at the Peabody Museum of Natural History. If you drive a little further up the coast, near public beaches such as Hammonasset and Rocky Neck, you’ll find Mystic Seaport. Like Sturbridge, Mystic is also a living history museum, but this time centered on New England’s maritime heritage. For boat lovers, the yearly WoodenBoat Show at Mystic is a real treat.

It was so much fun including in Heart Blade some of the places I’ve visited over these past few years. Book 2, Night Blade (out later this year!), moves a little further afield – there are still scenes set in Connecticut, but we also get to go to Toronto, Canada, and the Adirondacks, in upstate New York. I’m looking forward to sharing some new book locations with you soon!

*all photographs used in this blog post are my own*

Someone asked me what my Heart Blade character Alex’s favorite TV show would be, and I immediately answered Star Wars Rebels. Because clearly when you’re an immortal vampire knight who’s taken a vow to never drink blood you’re going to be all about the Jedi, right?

Of course, I immediately thought, “Blog post!” So here it is: what shows all the Heart Blade characters like to watch.

Alex is a Star Wars Rebels fan. Kanan Jarrus is his favorite character. He’s also partial to Arrow and The Flash. He once met Stephen Amell at a convention and has the photo to prove it.

Camille loves sports. She’s a Packers fan and never misses a NHL game, especially if the Canadiens are playing. She owns all seasons of Gilmore Girls on DVD and has been known to quote lines from the show.

Diana likes to escape into Once Upon a Time. She’s also a Glee fan and has all the show songs on her playlist. She plays them loud to drown out the memory of her victims’ screams.

Rose never misses an episode of Supernatural. She’s cooled down on the show a little now she knows demons and vampires actually exist, but she can’t stay away from Sam, Dean, and Cas.

Ash loves Agents of SHIELD. He’s hoping they bring Bobbi back. She reminds him of his mom. He thought Agent Carter was really cool and doesn’t get why the network cancelled it.

Del will watch everything and anything. She’s fascinated by human TV shows and feels that with her memory loss she has a lot to make up for. One of her favorite characters is Arya Stark from Game of Thrones.

Jude always tells everyone that TV shows are a waste of time. But secretly he DVRs all the Reign episodes and then marathons them all at one go over a weekend with masses of pizza and junk food.

Dan likes The Walking Dead, even though Alex teases him mercilessly about it. He feels there is something marvelously simple about a world where all humans have to fear are zombies and each other.

Deacon says he only watches sports. But anyone who frequents his house knows he always has one of those home improvement or real estate shows on in the background. He’s mildly obsessed with Tiny House Nation.

What TV shows would your favorite characters watch? Let me know in the comments!