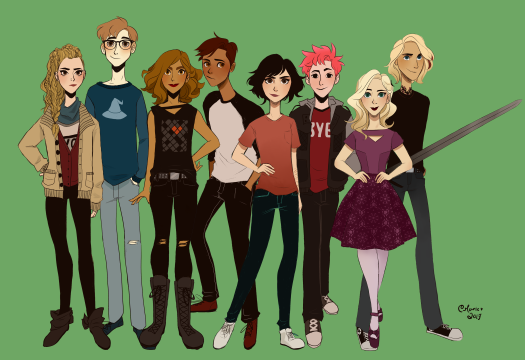 If you’d like a peek at some of the Blade Hunt characters, check out the gorgeous art by Corinna Marie (used with permission).

Adeline Raven has been a half-demon for a year. Del was sixteen when she was Gifted a full demon’s blood and lost all of her human memories. The only thing she remembers is carving a message on her arm with a knife. The scarred letters that spell NEVER on her left forearm are a constant reminder to stay true to herself and never give up.

James Asher Deacon, or Ash as he’s known to his family and friends, is a seventeen-year-old sentinel, a descendant of angels. His father leads the New England Chapter of sentinels, and fully expects Ash to take over when he grows up. Ash isn’t sure he wants to serve the archaic system of laws that turned a blind eye to his mother’s death, but what else is a Scion’s son supposed to do?

Camille Darkwing is a French Canadian half-demon. Gifted a full demon’s blood in 1932, the petite immortal teen is often underestimated, and that’s just the way she likes it. Most half-demons feed off darker emotions, such as anger, or fear. But Camille’s Immortal Hunger is a little…unusual. Fitting: after all, Camille has always preferred to do things her own way.

Alexander of York, also known as Brother Alexander, is a monk and former knight of the Crusades. Yes, Alex has been around for a while. The young English nobleman became a vampire almost a thousand years ago while he fought for King Richard the Lionheart. His sword Redemption has been his constant companion over the centuries.

Rosa Pietrowicz, known as Raze, is the seventeen-year-old orphaned daughter of a witch and a werewolf. She was hidden away as a baby by the Guild of Saint Peter for safekeeping – except Raze has never been one to enjoy playing it safe. Climbing walls to sneak out at night? Now, that’s more Raze’s speed.

Benjamin Kelley has been surviving on his own since he was thirteen, when his witch parents were executed for treason against their own coven. It’s been a grim sort of life, stealing for a living, but now that Ben’s turned eighteen it’s time to turn over a new leaf and try to keep things legal. If only his former crew would let him go…

Angelica Reis has been leading her small band of thieves since her early teens. The black sheep of the Reis witch clan has a knack for crime, and an iron grip on her crewmates. Don’t even think of stabbing Lix in the back: she has a talent for potions and can be absolutely ruthless when it comes to getting her way.

Finn Elmson is a pixie and a member of the Guild of Saint Peter. Always ready with a wink and a joke, Finn is also incredibly resourceful, and has wriggled out of many a sticky situation thanks to his sharp mind and even sharper teeth. He’s a valuable ally, and the Guild was lucky to recruit him.