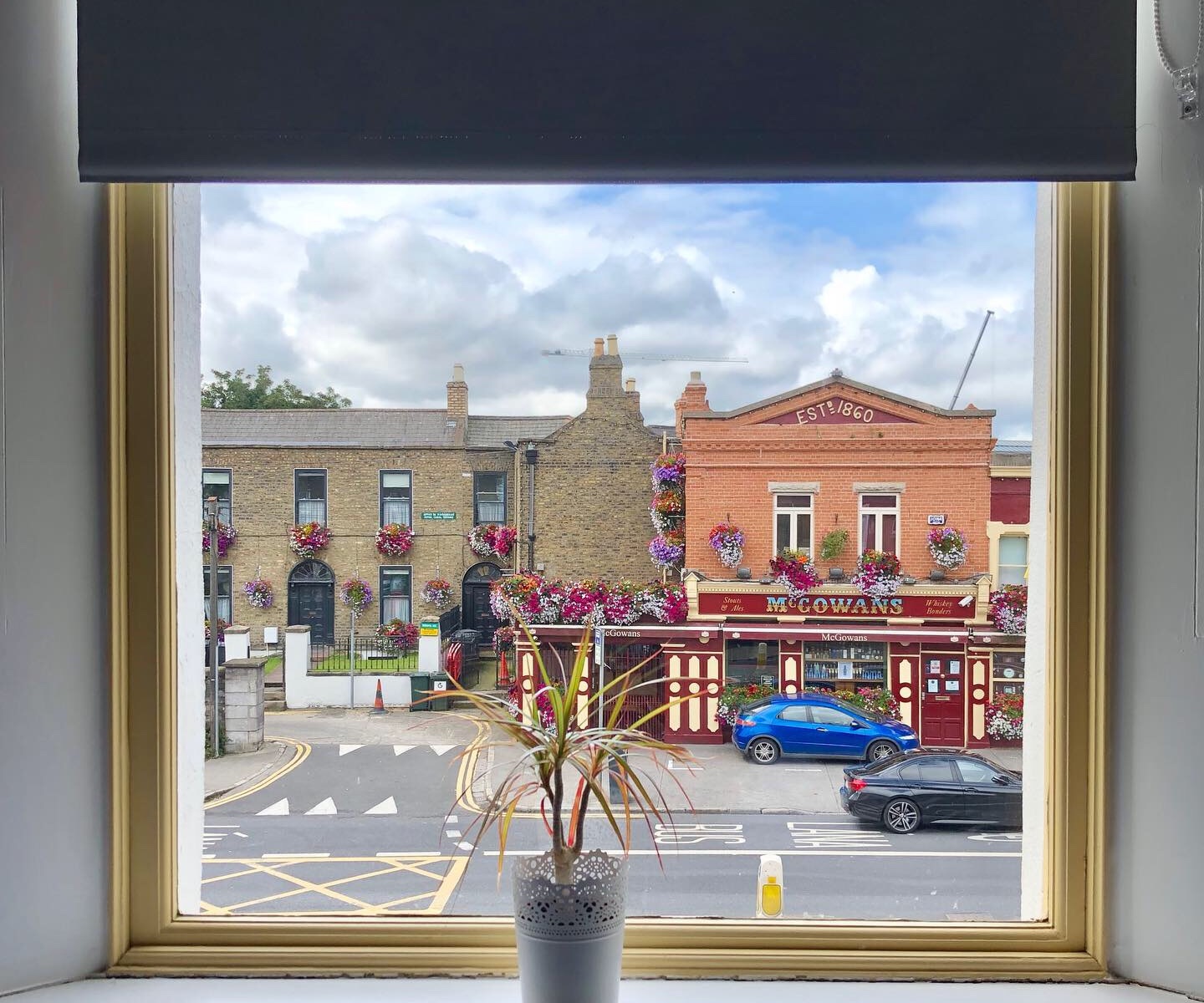 From the moment Worldcon 2019 was confirmed for Dublin, I knew I wanted to go. Eurocon was taking place a week later, in Belfast, and this was the most golden of golden opportunities to get to meet some of my UK and Irish SF/F writing friends in person. I talked it over with my husband, and we decided I should take the plunge and buy the memberships to both cons.

Fast forward two years and there I was, landing in Dublin on a grey and drizzly Wednesday morning at oh-my-god-it’s-early o’clock for my first ever Worldcon. I had arranged to meet my friend Pol, who was sharing a rental house with me and a couple of others from the forum we all post on — the SFF.Chronicles.com. Pol was fresh off the ferry from England, also arriving at horrible o’clock in the morning, so we kicked off our adventure by spending the hours until we could check in by traipsing all around Dublin. Two museums and a multitude of other stops later, including Trinity College and the statue of Oscar Wilde, it was finally time to drag our exhausted and zombie-like selves to a taxi and head over to our home for the week. 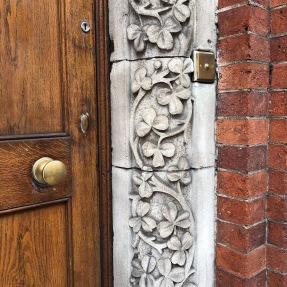 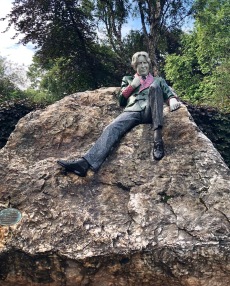 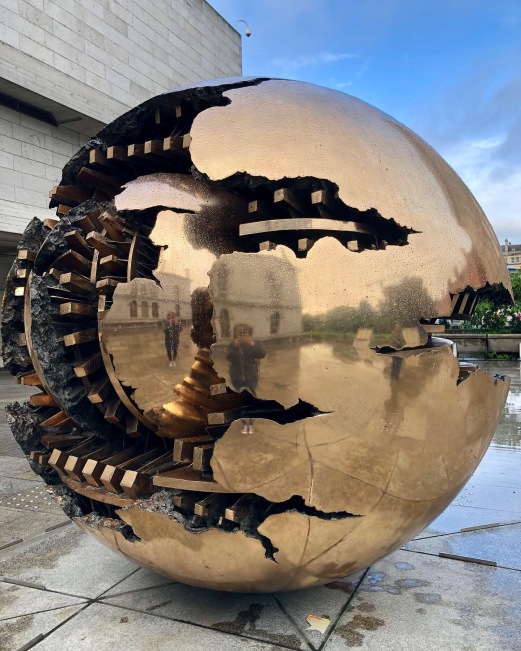 The rest of the day was spent settling in, getting to know my housemates in person, and popping over lightning quick to the event venue to get our registration done. Thursday morning was Day 1 of Worldcon, and the four of us — Pol Dee, Jo Zebedee, Shellie Horst, and myself — took a taxi in the morning, excited to get started. The first panel I caught that day was Invasion and the Irish Imagination (Jo Zebedee, Peader Ó Guilín, Ruth Frances Long, Ian McDonald, Jack Fennel), a lively and thought-provoking discussion. Perhaps my favorite moment was when Jo told us, “as writers, keep asking those questions, and asking them hard.”

Later, in Sports in Science Fiction and Fantasy (Neil Williamson, Chris M. Barkley, Rick Wiber, Fonda Lee), Fonda talked about sports as a microcosm of society, and suggested that “sports are a way to reflect and reinforce some of the social conflicts and divisions.” I was particularly interested in this panel, as I’m getting ready for another revision pass of the SF sports thriller that I wrote last year. Lots of great tips! 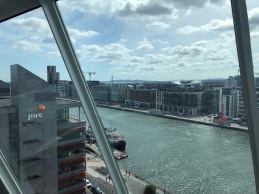 View of the Liffey… 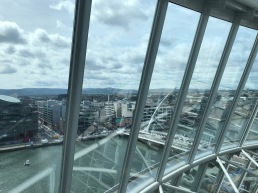 …from the conference center

I managed to fit in two more panels that day, Found in Translation (Rebecca Gomez Farrell, Jean Bürlesk, Umiyuri Katsuyama, Andy Dudak), and ‘Celtic’ Fantasy and Mythology (Kerry Buchanan, Kathryn Sullivan, Kristina Perez, Deirdre Thornton, David Cartwright). I also connected with some of the other SFFChronicles members who were attending Worldcon, and a few other ‘e-friends’ who I had been looking forward to meeting in person. As evening fell, we shared another taxi home to our ‘con within a con’, to chat about our day over dinner and a well-deserved glass of wine.

Friday was a day for readings, with one by Charlie Jane Anders — a delightful surprise, as I wasn’t familiar with her work — and Victoria Schwab — who is every bit as amazing in person as she is online. At the end of the day it was my turn ‘on stage’, as part of the Broad Universe Rapid Fire Reading. It was lovely to be part of Worldcon’s programming, and we had a nice turnout for our event. 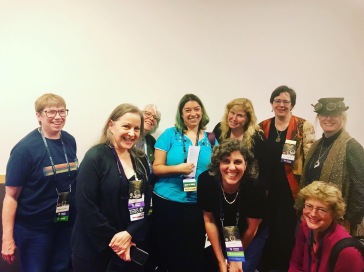 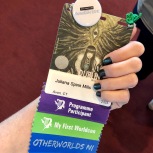 By Friday, Worldcon was busy, busy, busy; lots of people and lots of lines everywhere for all panels and events. We were forced to strategize, paring things down to basics, attending only the things we really wanted. For me, on Saturday, this included a great panel on Gender and Sexuality in YA (Victoria Schwab, Sam Bradbury, Diana M. Pho, Rei Rosenquist, Rachel Hartman), where we were urged by Rei to “stand on the ground you stand on” and know which story is actually ours to tell. Victoria added that writers need to understand the core of their own identity first.

Other Saturday events included a reading by Adrian Tchaikovsky, and a kaffeeklatsch with Peter V. Brett, where much Demon Cycle wisdom was shared. But possibly my favorite moment of the day was going out to dinner with a mixed group of SFFChronicles members and writers from Otherworlds NI, a Northern Irish science fiction group, the brainchild of Jo Zebedee. The Otherworlders are all collectively lovely, and us Chronners were more than happy to become honorary Otherworlds adoptees. This, to me, is the highlight of these events: the friendships forged or strengthened, the conversations held, the smiles and laughter gathered.

I kicked off Sunday by attending a kaffeeklatsch with fellow Broad Universe member Randee Dawn. This was followed by a panel on Getting Published and Staying Published (E.C Ambrose, Patrick Nielsen Hayden, George Sandison, Michelle Sagara, Rachel Winterbottom), where Elaine reminded us that most writers’ careers are a rollercoaster of ups and downs instead of a linear ascension. At What is Irish Science Fiction Now? (Jo Zebedee, Val Nolan, Atlin Merrick, Sarah Maria Griffin), Sarah declared that “no one is going to talk about us if we don’t talk about ourselves. (…) It is urgent that we represent ourselves.” When the subject turned to the divide between perception of ‘literary’ vs genre fiction, Sarah delighted the audience by saying, “I do believe they’re called book shelves for a reason, and not book plinths.”

Sunday evening was the Hugo’s ceremony, which Pol and I livestreamed from the house as we were both absolutely out of energy. I had already decided to give the last day of the con — Monday — a miss in the name of Dublin tourism, but I felt that Sunday was the perfect ending to an extremely hectic but very rewarding event.

More to come! Touristing in Dublin and Belfast, Eurocon/Titancon, the Titancon coach tour, and my day out in Howth…

One Reply to “Ireland Roundup: Part I (Worldcon)”