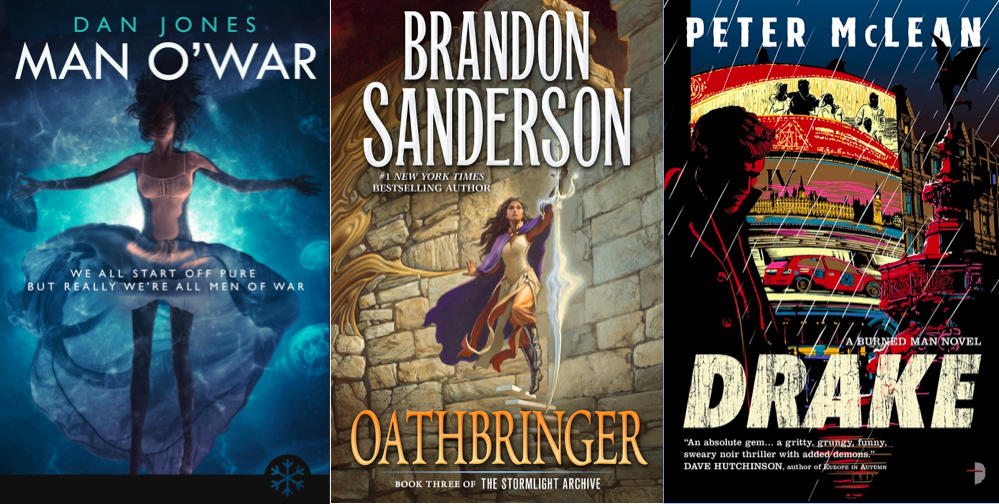 It’s snowing, and I’m home with my kids watching big flakes tumble down outside. This is perfect weather for reading, writing, or talking about books someone else wrote! Preferably with a blanket and a big mug of tea. After a busy (and wonderful) December, with a houseful of visiting family, January brought silence and a chance to dip into some of the titles on my to-read list.

I kicked off January with an ARC for Man O’War, a sci fi crime thriller by Dan Jones, which arrives in bookstores in March. The story begins when illegal pleasure robot Naomi lands in a fisherman’s nets, and sets him on a dark journey that starts off in London’s seedy criminal underworld and ends up on an oilrig in Nigeria.

Man O’War brings us a fully believable near-future world, with a diverse cast of wonderfully gray characters. I tend to love characters that are neither wholly good, nor wholly bad, and Jones offers us a whole range of them, from mobsters to AI software developers, from politicians to police officers. Tightly plotted and fast-paced, Man O’War is a really nice debut novel.

I love Brandon Sanderson’s work, and have been faithfully devouring his Stormlight novels as they come out. I’m actually a little late on this one, but I finally got my hands on Oathbringer, the third book in the series.

If in Book 2, Words of Radiance, Kaladin stole the show, then Book 3 belongs in equal part to Shallan and Dalinar. Their character development arcs are superb, and Shallan continues to be one of my favorites in a series full of great characters. If you love Big Epic Fantasy and haven’t tried the Stormlight Archive yet, well, what are you waiting for?

To round off the month, I jumped genres yet again and picked up Drake, the first book in Peter McLean’s Burned Man series. Hitman Don Drake find himself backed into a corner when a gambling debt puts him at a demon’s beck and call. Add in a bound magical assistant, a couple of not-so-angelic angels, and a Fury or three, and Drake’s life… well, let’s just say it gets complicated, fast.

Drake is urban fantasy at its grittiest. McLean’s main character is foul-mouthed, slightly on the sordid side, and more than a little lacking in moral fiber. But he’s also deliciously snarky, and you can’t help rooting for him as he flounders around, trying to do the right thing and failing, over and over. I’m looking forward to picking up Dominion, the next in the series.

Here’s a little taster from Drake that I think sums up both the humor and darkness: “I came back a few minutes later with a bottle half full of my piss, nail clippings, and spit. Magic is such a glamorous lifestyle it’s a wonder more people don’t take it up.”

I’m off to Boskone 55 in just over a week, and the convention’s Guest of Honor is Mary Robinette Kowal. I’ve had the author on my to-read list for a while now, so I figured this was the perfect chance to dip into her work.

The premise of Ghost Talker is fabulous, and so far I’m really enjoying it. Set during World War I, it’s the tale of Ginger Stuyvesant, a medium for the Spirit Corps. Each soldier heading to the front is conditioned to report to the Spirit Corps when they die, passing on crucial information on German troop movement for use by military intelligence. The system has been working well so far. But now the German forces are becoming suspicious, and the Spirit Corps mediums may be in danger…

I have two books lined up to read next. One is by another Boskone Guest of Honor, and my co-panelist: Tamora Pierce. I’ve heard so much about Pierce’s work, so I grabbed a copy of her middle grade book First Test. This is the story of Keladry, the first openly female page, during the first year of her training. I always love a good ‘girls breaking stereotypes’ tale, so this one definitely appealed to me.

The other is the debut novella Pretty Marys All In A Row, by Gwendolyn Kiste. This one sounds amazing: the story of four Marys — Resurrection Mary, Bloody Mary, Mistress Mary, and Mary Mack — who live together, trapped in urban legend and with no real understanding of who they truly are. But to fight for their freedom from the myths that entangle them, they must first unravel the mystery of their pasts. I’ve read short stories by the talented Kiste before, and I’m sure her longer work will be just as wonderful.

Wishing you all a happy Wednesday, and lots of blanket and book snuggles!