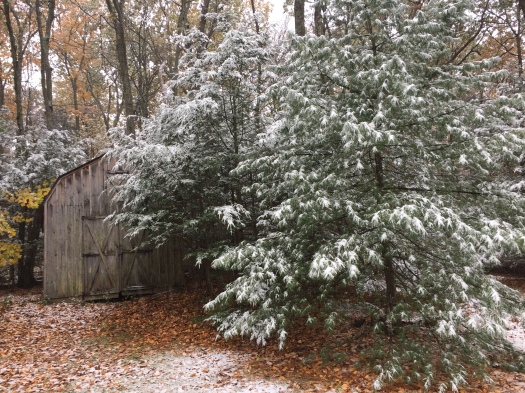 It’s the end of October and the Fall TV season is in full swing. But no matter how many episodes are piling up on the DVR, I’ll always find time for books in between Agents of SHIELD and Star Wars Rebels. And, hey! Today the first snowflakes fell in my corner of the world. Which means an extra excuse for snuggles and stories.

Recent Reads: Witches, fairies, goddesses…and the cool gleam of blaster fire in the dead of the night.

Liberator is the debut novel by co-author powerhouse duo Nick Bailey and Darren Bullock. This exciting and fast-paced tale is set in a future where humans and evolved-humans are spread across a galaxy dominated by big corporations with private armies.

A rescue story about a disbanded paramilitary team who get back together to save one of their own, Liberator is an adrenaline-fuelled ride of the ‘shoot first and ask questions later’ variety.

I’ve seen rave reviews for Susan Dennard’s Truthwitch all over the place, so when I spotted it at my local library at the front desk of the teen section, I grabbed it immediately.

The is the story of Safiya and Iseult, a Truthwitch and Threadwitch who, despite their wish to be left alone to just live their lives, get dragged into an impending war between neighboring empires for control of the region. This nicely-crafted YA fantasy has everything I could wish for: magic, adventure, intrigue, treachery, and a breathless and dashing escape.

Although historical romance isn’t something I normally gravitate towards, I couldn’t help being drawn in by the premise of Jodi McIsaac’s Bury the Living, with its blend of Celtic mythology, time travel, and adventure.

When former IRA member turned peace worker Nora O’Reilly starts having dreams of a mysterious stranger asking for help, it leads her to Brigid of Kildare, who sends Nora back eighty years to the height of Ireland’s civil war. The romance aspect is subdued enough that this novel should appeal to anyone who likes a dash of fantasy in their historical fiction.

I’d been looking forward to the release of Peadar Ó Guilín’s The Call, and devoured it in one afternoon as soon as it landed on my doorstep. It certainly lived up to all my expectations! This dark fantasy tells the story of Nessa, a teen living in a post-fairy-apocalyptic nightmare where the Sidhe wage war on the children of Ireland.

In Peadar’s dark world, Irish teens can be ‘Called’ at any moment and taken to the Grey Land to play games of torment and torture. Few survive, and those who do return alive are often changed in horrific ways. The Call treads a delicate line between fantasy and horror, without ever becoming too heavy despite the tension and terror. It’s an amazing book, and will definitely go down as one of my top reads in 2016. I liked it so much I badgered the author for an interview, which you can read over on SFF World.

I’m almost done with Fran Wilde’s Cloudbound, the sequel to her awesome Updraft. I loved the first book, with its incredible above-the-clouds civilization and people soaring between living bone towers on artificial wings of silk. In the second book, Fran switches from Kirit’s point-of-view to Nat’s, giving the story a different slant and focus as it dives beneath the cloud layer that forms the boundaries of the first book.

One of this week’s new releases is Abendau’s Legacy, by Jo Zebedee. I shouldn’t even be touching this one, as I have a physical and virtual to-read pile that’s getting ridiculous. But I couldn’t help peeking inside, and the third and concluding title in the Inheritance Trilogy looks as though it will be as good as, or better, than volumes one and two. And that says a lot! You can see my review of the first book here.

To Read: Time to get my epic on.

I’ve been in the mood for some good old-fashioned epic fantasy for a while, so it’s a good thing I have two books all lined up and ready. The first one’s been sitting on my kindle, waiting for the right frame of mind. It’s Exile by Martin Owton, book 1 of the Nandor Tales. With book 2 on the horizon, I think it’s about time I finally dove into this beauty. The other book on is a relatively new release: The High King’s Vengeance, sequel to Steven Poore’s lovely The Heir to the North, which was one of my surprise faves last year.

I just looked out of my window and the snow is still falling steadily. But with so many great titles to look forward to, I say, “Bring it on.” I have blankets, I have tea, I have a warm dog at my feet. What else can a book lover want from life?