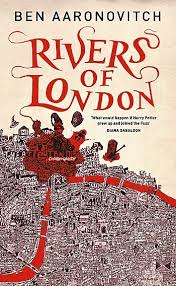 I’ve had Ben Aaronovitch on my to-read list for a while. Somehow he kept getting pushed down the list, until the other day I spotted Rivers of London (Midnight Riot in the USA) at my local library and thought, ‘why not?’

I was hooked by the end of the first page.

I’d heard plenty of good things about Ben’s Rivers of London series, also called the Peter Grant books after the main character. I’d heard that they were well written. Fast-paced. Exciting. I certainly agree with all of those, but somehow I missed out on how funny they are. I wasn’t expecting funny. He had me constantly grinning as I zapped my way through his first, second, and third book in quick nail-biting succession.

In his first book, Rivers of London (Midnight Riot), we meet PC Peter Grant, a lowly constable in the London Metropolitan Police Service. Peter… Well let’s just say he isn’t headed for great things. In the words of his friend and co-worker PC May, he’s just too easily ‘distractible’. But distractible turns out to be a good quality when it leads to an interview with a murder witness…who just happens to be a ghost.

From here on, Peter’s life grows steadily weirder and more interesting, in equal proportions. Pretty soon he finds himself working for a secret branch of the police force under the supervision of England’s last official wizard, Inspector Nightingale. The plot jumps and leaps and twists between river gods and vengeful spirits bent on mayhem and murder in this absolutely delightful book.

I had to have more. Soon I was diving into Aaronovitch’s second book, Moon Over Soho. This one delves into the world of jazz with an investigation into the mysterious death of a number of musicians. Ben’s third book, Whispers Under Ground, takes us into the tunnels and sewers underneath London’s streets when a murder victim is found at the end of Baker Street tube station.

I finished the third in a bit of a fangirl daze, thinking why haven’t I read this before!!! Luckily for me, there are more published books in this great series, just waiting for me to pick them up.

If you like your supernatural police novels to have a decidedly cheeky approach to apprehending a number of not-your-usual sorts of suspects, then Ben’s work is definitely for you. 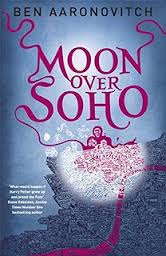