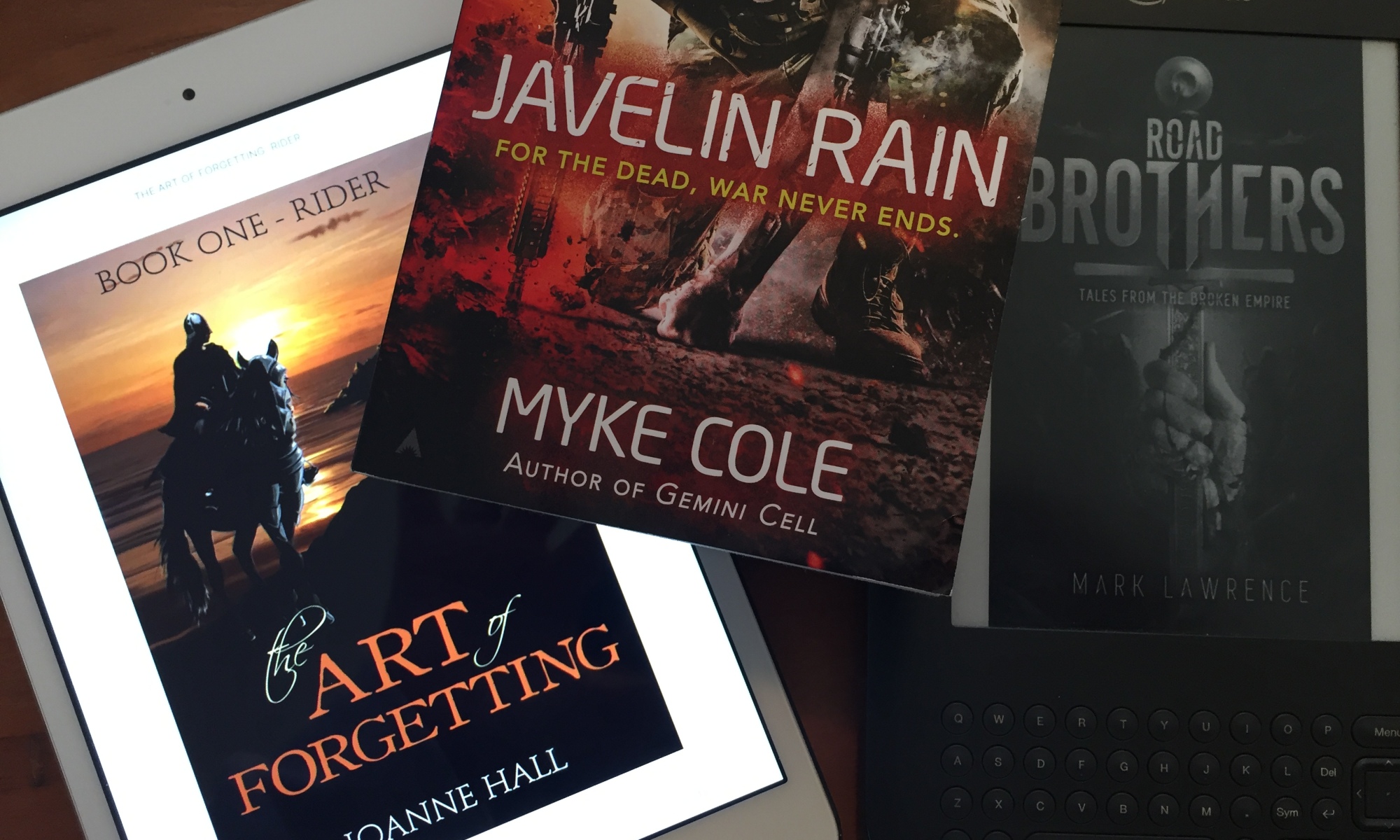 Oh, hey! It’s April already. April means my birthday, which means books. Because a girl can always do with more books, right? And with so many recent releases I’ve been keeping busy. Here are some of my latest faves…

Recent Reads: On the road… Quests, journeys, escapes, and revenge.

I absolutely loved The Art of Forgetting: Rider by Joanne Hall. In fact, I liked it so much I went straight into the sequel and concluding novel, The Art of Forgetting: Nomad. I’m a sucker for a good coming-of-age fantasy tale, and this one takes interesting detours as it follows a boy’s journey to become a cavalry officer.

Hall’s prose is crisp yet flowing, and she does a masterful job of treading the line between overly sparse and heavily ornate description that so many epic fantasies have trouble with. Rhodri’s tale begins with the familiar setting of the military schoolground, but never quite settles into the expected, keeping us constantly on our toes. And when Rhodri eventually turns his back on everything he has worked for, Hall gives readers a refreshing shift in her main character’s viewpoint that sheds new light on the story.

Javelin Rain by Myke Cole was one I’ve been waiting for, ever since Gemini Cell arrived in 2015 and I devoured it in one day. And the sequel certainly didn’t disappoint. Those of you who read my blog will know I’m a big fan of Cole’s high-octane military fantasy novels. He writes incredibly fast-paced stories with great action sequences, but he also serves us well-thought-out characters with a lot of heart.

Javelin Rain begins exactly where Gemini Cell left off, with Jim Schweitzer on the run with his wife and small son. But escape is hard when you’re an undead former Navy SEAL being chased by a hoard of super zombies with a penchant for blood and carnage. And to make things worse, the man behind those zombies may have motives of his own for the actions he carries out in the name of his country. Sounds intense? It is, but at the same time Cole isn’t afraid to take a pause and give his readers touching and very human moments.

I bought Road Brothers by Mark Lawrence a while back, but it got buried under a pile of other to-reads and somehow I never got around to it. Making up for lost time, I ended up gobbling down the whole thing in two days. This one is a treat for fans of Lawrence’s Broken Empire trilogy: a compilation of short stories on Jorg of Ancrath and his band of outlaws.

I loved Prince of Thorns and the subsequent Broken Empire books, so I really enjoyed this opportunity to get a better look at some of Jorg’s crew. The stories bring us a mixture of exploits and backstory, and as a bonus feature they all end with a short commentary by the author on the character and why he chose that particular approach for that story. Written with Lawrence’s trademark poetic flair, the collection plays with different narrative styles so it never feels stale, and you never quite know what to expect as the author skips from one character to another. Well worth reading, but familiarity with the Broken Empire world is helpful, so if you haven’t tried Lawrence’s work I’d recommend starting with Prince of Thorns.

I’m halfway into a brand new anthology by the also brand new Woodbridge Press, The Haunting of Lake Manor Hotel. Now, horror isn’t a genre I’d usually read, but since I’m familiar with quite a few of the authors I was willing to lock away my usual fear of things that go bump in the night and try it out. So far, so good: I’ve already been blown away by the opening stories and I haven’t had to resort to a nightlight yet. Yet being the imperative word here.

To Read: Fight or flight…

Another recent launch on the anthology scene is Fight Like a Girl (Kristell Ink). Edited by Roz Clarke and Joanne Hall, this collection of short stories about female strength sounds amazing. With a great line-up of authors writing everything from space opera to urban fantasy, and a tagline on Amazon that says, “These are not pinup girls fighting in heels; these warriors mean business,” this has to be my kind of book. Oh, and it has an awesome cover, too.

I’m a huge Brandon Sanderson fan, and you can never have too much Wax and Wayne, so up next on my to-read list is Bands of Mourning, the latest in the Mistborn saga. I always enjoy Sanderson’s carefully constructed magic systems, and the swooping, soaring Wax and Wayne stories unite this with a certain element of lightness and fun that are a pleasure to read.

So that’s my roundup for April. I hope you’ve found some great reads of your own; with so many great releases this year alone, the tough decision is where to start!