And so we’ve reached the end of my Dresden Files reread (and I still blame Tumblr!). It’s been fun reconnecting with Harry and Co. Even though many of the novels were still reasonably fresh in my mind, going back to the very beginning gave me a chance to spot the clues Jim Butcher has been leaving as he builds his series.

The Dresden Files just keeps on getting better, and I look forward to the new book, Peace Talks, which should be out in January 2016 according to Jim’s recent Reddit AMA. To help time pass before my next dose of Chicago’s finest, I’ve already preordered Jim’s latest venture, The Aeronaut’s Windlass, first in his new steampunk Cinder Spires series.

The last five books on my Dresden list are both incredibly action-packed (but hey, it’s Harry, what’s new?!) and push the stakes up even more. There are some seriously intense stories in this next batch, and I think the only reason the encroaching darkness doesn’t become unbearable is that the fast pace doesn’t give us time to think too hard until it’s over and then it’s all, ‘wow’ and ‘I can’t believe he did that to them’. Fast and furious, and Harry just keeps getting more and more interesting as Butcher adds facets and depths to his character.

The story kicks off with Warden Morgan, who has always hated Harry, staggering up to his door half dead and seeking help. From then on the plot thickens with Harry racing to figure out the traitor among the ranks of the White Council. When his brother, Thomas, is taken by a super-powered shapeshifting naagloshi, Harry performs a Sanctum Invocation and bonds with Demonreach, the spirit of the island he visits in Small Favor.

After rescuing Thomas with the help of a number of Council members and House Raith, Harry confronts the White Council and unmasks the real traitor.

Highpoints of Turn Coat include Mouse having to intervene multiple times when Morgan and Molly keep trying to kill each other (basically every time Harry leaves them alone!), seeing the Senior Council members working alongside the Raith ladies, and wizard Listens-to-Wind’s awesome shapeshifting powers.

Changes, Book 12 of the Dresden Files

One of the most heartbreaking Dresden Files novels and, for this reason, one of the hardest to reread. Seriously. I had to mentally steel myself to dive back into this one, knowing how much I was going to suffer alongside Harry.

In Changes, Harry finds out that he’s a father. He and half-vampire Susan Rodriguez have a little girl, only six years old, who has been taken by the Red Court in order to fuel a blood ritual that will take out little Maggie, Harry, and all his relations. Meaning Thomas, and Ebenezar, who in this book is revealed to be Harry’s maternal grandfather.

Harry gathers a taskforce to take back his daughter at the ritual site in Mexico. However, shortly before they are scheduled to depart, Harry is badly injured and crippled from the waist down. He makes a deal with Mab: he’ll take up the mantle of Winter Knight she’s been offering him since he helped take down Lloyd Slate in book 4, Summer Knight, if first she lets him save Maggie.

Harry’s group storms the ritual site with the help of some last-minute assistance from Vadderung (Odin) and Ebenezar McCoy. But he ends up killing Susan, who sacrifices herself for her daughter’s safety. When they get back to Chicago, Harry is shot. The story ends with Harry falling into the cold depths of Lake Michigan, dead.

Wow, right? This is arguably the most intense of Jim Butcher’s novels so far. Not only does Harry gain a daughter and a grandfather, he loses Susan, who he still loves, and loses himself too, first to Mab and then to a bullet. Way to leave us on a cliffhanger, Jim! But seriously, it’s an incredible book, although a very dark and painful one, too.

This one comes very close to Skin Game as contender for favorite in this batch of novels. Harry is a ghost! And he can’t touch things, or do magic! Well, at least at first. To see an all-powerful wizard such as Harry having to deal with the baby-steps frustration of suddenly knowing nothing about how the world works was a refreshing break.

By isolating Ghost Harry and making him deal with things on a different plane of existence, albeit within the world he used to know, Jim allows us a much needed breather from all the rest of the drama. It was an unusual direction to take, and in my opinion it totally works.

In Ghost Story we see Harry strengthening ties with archangel Uriel as he returns to Chicago in spirit form to discover the person behind his murder. He gets caught up in the dead Corpsetaker’s attempt to gain a new magic-compatible body by taking over ectomancer Mortimer Lindquist. To save Mort, Harry teams up with a legion of ghosts as well as his old buddies Murphy, Molly, Butters, and Co. The story ends with Harry concluding his mission and returning to life to find himself on Demonreach, being tended to by Mab and the island’s spirit.

Although there is a lot of potential darkness here, with revelations about what happened to Chicago and the world after the Red Court was destroyed and Harry died, Jim keeps it from being too heavy a subject by focusing on Ghost Harry and his activities, leaving a Chicago under siege as background to the story. Highlights include spirit Harry hanging out in Bob’s skull, a visit to Molly’s brain, and Uriel’s seven little words.

Harry’s first mission as the reluctant new Winter Knight! Great training scenes at Mab’s fortress Arctis Tor as Harry is not-so-gently nursed back to health by Mab. In this novel, Harry gains a deeper insight into the true work of the Winter Court of the Sidhe, and an eye-opening look at the ages-old battle being waged to keep the Outsiders from breaching the gates to the world.

But Harry’s battle is on ground dearer to him: his Sanctum, Demonreach, which he now discovers is actually a sort of high-security prison for all sorts of terrible creatures. Worse: someone is trying to break in, and the island’s defense mechanism is all set to blow Chicago and a large portion of the surrounding area to bits.

As if that’s not enough, he also has to figure out why his new boss has ordered him to kill her daughter, Maeve the Winter Lady. Is Mab really insane, or is there something else going on? In true fae fashion, Harry is kept going around in circles by both Summer and Winter, trying to dig through the layers of deceit and find the truth before the island explodes.

Highlights include quality time spent with old Mother’s Winter and Summer, and Harry’s interactions with Demonreach. Oh, and an adorable brotherly bonding scene between Harry and Thomas, who hadn’t seen each other since Harry had himself killed at the end of Changes.

My absolute favorite out of these five novels. In fact, my absolute favorite Dresden Files book, period. I’m a sucker for a good heist story, and it doesn’t get any better than an attempt to burgle the Lord of the Underworld himself, Hades. And in service to none other than Nicodemus Archleone himself, the centuries-old Denarian bonded to the fallen angel Anduriel, by order of Mab, the Winter Queen.

Of course, Mab has her reasons for loaning her hard-earned Winter Knight to a villain like Nicodemus, and Harry eventually figures out the story isn’t quite as straightforward as he thought, and that powerful forces are actually conspiring to give him the leverage he needs. The only question is, can Harry make it alive through the heist, successfully double-cross Nick at the end, and make it out in time before the parasite in his head is born? A parasite that he soon finds out is actually the brain-child of Lasciel’s departed shadow, Lash, and his own self. Yikes!

This book is just so much fun. Really, there’s nothing much to say except well done, Mr. Butcher. Oh, and lightsabers. And parkour! *happy sigh*

Interestingly, I finished my reread of Skin Game this week, and the same day I got a certain package from Worldbuilders. Nice timing! 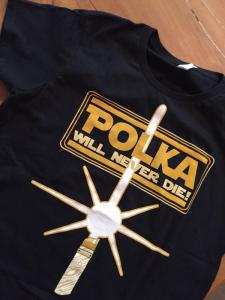 Personal ranking from favorite to less favorite (because there ain’t no such thing as a bad Dresden novel!):

2- Uriel (who has appeared before, but now gains momentum)

And because this is the last segment of the Dresden Files Reread, here are my all time top five Harry Dresden novels: